Dani Alves Is At The Verge Of Leaving Barcelona, The Contract Will Not Be Renewed For The Next Season!! 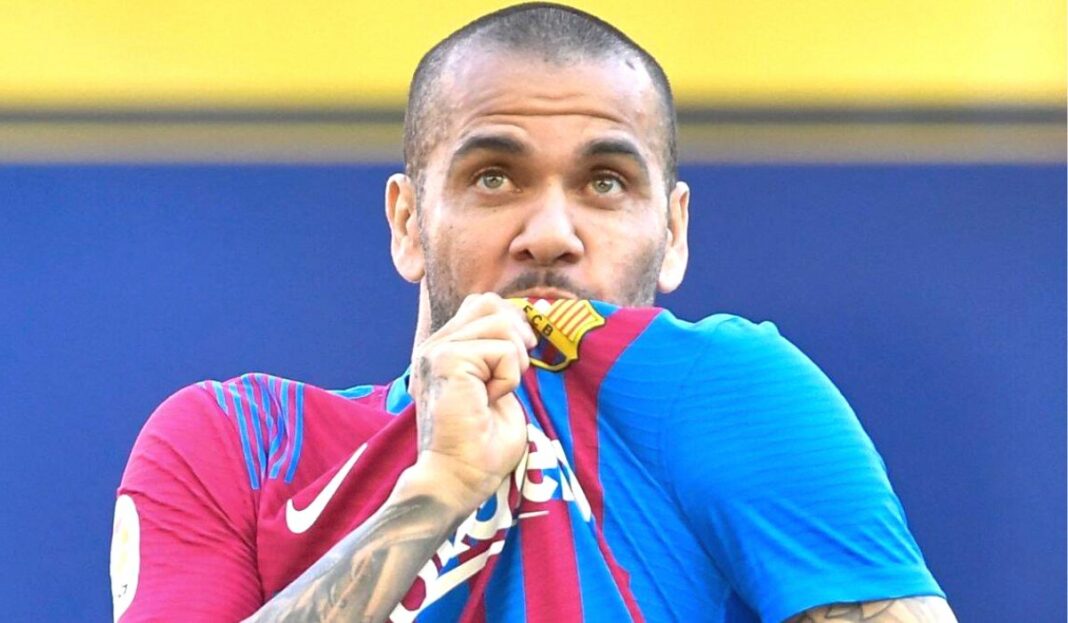 When Dani Alves first came to Barcelona, the team was in shambles, having suffered a stunning departure from the UEFA Champions League group stage, as well as disappointing La Liga results.

Barcelona has successfully turned it around four months later, owing in part to the services of Alves. Inside the dressing room, the experienced defender has been a powerful presence, motivating the young players to play for the badge.

However, as the season nears its conclusion, the club will be forced to make a choice on the Brazilian’s future. Under the premise that Cesar Azpilicueta would join Barcelona from Chelsea this summer, Barcelona will not offer Dani Alves a new contract at Camp Nou.

Xavi Hernandez To The Spanish Club

When Xavi Hernandez took over at Barcelona, the 38-year-old right-back became his first signing, arriving as a free agent on a short-term contract to assist his former club and colleague in their time of need.

And despite a poor start to the season, he made appearances in 14 La Liga games, scoring one goal and adding three assists to help the Blaugrana finish second in the league.

His comeback to the club, however, appears to be finished, with Spanish publication Sport reporting that his short-term contract, which expires at the end of June, will not be extended.

Shortly after old colleague Xavi returned as manager, Alves was brought in on a temporary basis, and the veteran exceeded expectations with his performances, cementing himself as the Blaugrana’s first-choice right-back by the end of the season.

Despite this, whether Alves will be granted a new contract this summer has been a source of speculation. His contract is set to expire at the end of the month, and the club has finally made a decision, notifying the 39-year-old that he will not be extended.

According to some reports, Alves was anxious to stay with the Catalan giants and even stated that he would sign “any sort of contract” to do so.

The Brazilian international is content with his life at Barcelona and wants to stay with the club, which might help him prepare better for the FIFA World Cup in 2022.

Alves has claimed that money will not be an issue when it comes to signing a potential extension and that he would not hold out for a lucrative contract.

Even if a short-term arrangement was proposed that would expire in time for the 2022 World Cup in November, Barça remained dubious.

Alves’ second term at Barça began in the middle of last season, with former colleague Xavi swooping in to bring the defender back following a tumultuous departure from Sao Paulo.

Alves is thought to be drawing interest from a number of European teams, and he is anxious to stay at the highest level in order to compete in his third World Cup.

Despite their financial woes, Barcelona has big ambitions for the summer transfer window. Andreas Christensen and Franck Kessie have long been linked with moves to Bayern Munich, while Robert Lewandowski, Marcos Alonso, and Cesar Azpilicueta are all on the radar.

Despite Barcelona’s present possibilities at right-back, it appears that the club has decided not to give Alves a new contract due to the pending arrival of Chelsea and Spain defender Cesar Azpilicueta.

Sergi Roberto’s contract with Barcelona was extended earlier this summer, but Sport reports that ‘Barça, with this move, appears to be sure about Azpilicueta’s entrance, albeit they will have to negotiate his exit with Chelsea.’

Dani Alves has subsequently confirmed the news on Instagram and thanked the Barcelona fans, writing:

“Greetings, clues… It’s now time for us to say our goodbyes. It had been more than 8 years since I had devoted myself to that club, those colors, and that house… Years pass, routes divert, and stories are written for a while in various places — and so it was in this case.

They attempted to expel me, but they were unable to do so because you cannot fathom, or can you, how tenacious and resilient I am.

Many more years passed until soccer and life, which, as always, are thankful to those who appreciate them, decided to allow me to return here and say my goodbyes.

But not before thanking all those who work behind the scenes, all those who make our show go smoothly, to all of them: THANK YOU.

I’d also want to express my gratitude to all of the personnel for providing me with the opportunity to return to this Club and once again wear that great shirt; you have no idea how delighted I am… I hope they don’t miss out on my insanity and everyday joy.

Hopefully, those who remain will change the course of that wonderful club’s history, as I hope from the bottom of my heart.

“There were 23 titles won, including two triples, one sextuple, and a fantastic golden book!”

Alves wants to play for Brazil in the 2022 World Cup this winter, and numerous European teams are reportedly interested in signing him.

Furthermore, RCD Mallorca is interested in signing the experienced Brazilian defender ahead of the 2022-23 season on a Bosman deal.

Few players in the history of the game can equal Dani Alves’ illustrious career. The 39-year-old is the most successful player in club history, having won a total of 42 titles, with his most successful era as a professional footballer coming during his first stay with Barcelona.

Alves had found success at other teams since leaving Barcelona some years ago before returning to the Camp Nou on a free transfer this past winter.

Despite being nearing the end of his career, the veteran Brazilian defender was a consistent performer for Barcelona, contributing one goal and three assists in 16 games.

However, as the 2021/22 season came to an end, Alves’ future at Barcelona became increasingly questionable. The Blaugrana had no reservations about offering the 39-year-old a new deal at first, but they later changed their minds due to their desire to recruit a new right-back.

FC Bayern Munich Has Completed The Signing Of Ryan Gravenberch

Even though he will turn 40 before the 2022-23 season finishes, Alves has plenty of admirers. And the experienced Brazilian defender may stay in La Liga after leaving Barcelona, with RCD Mallorca interested in a Bosman transfer in the summer transfer window.

After a tumultuous season, Mallorca has remained in La Liga and will compete in the top division for the second year in a row after returning from the Segunda Division last year.

The expertise of Alves might be essential in avoiding the dreaded “second-season syndrome.” A transfer to Mallorca might be on the cards for the 39-year-old, who is just looking for a short-term deal.