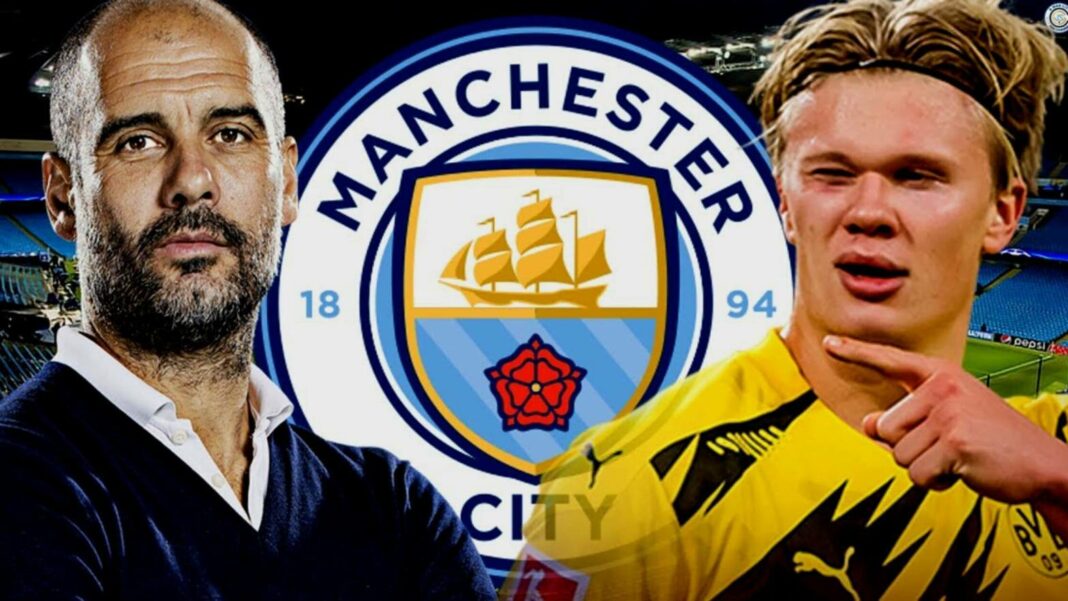 Manchester City is yet to formally introduce a new signing Erling Haaland, even though the striker’s transfer from Borussia Dortmund was finalized over a month ago.

Earlier this May, the club signed a preliminary deal with Dortmund to sign the superstar striker for £51 million in time for next season. And, with the Blues finishing their season with a 3-2 win against Aston Villa to retain the Premier League championship on Sunday, Haaland has landed in the city to finalize his move.

City reported on 10 May that an agreement had been reached with the German heavyweight to sign the 21-year-old, subject to an agreement on personal terms. He is expected to join the club in a deal worth £51 million.

Haaland has subsequently visited Manchester and has toured City’s training complex while dressed in City gear. He’s also had dinner with club executives and gone property hunting in Cheshire.

Erling Haaland’s possible transfer to Manchester City was publicly confirmed in May. The Citizen, on the other hand, has yet to reveal the player. Check-in to discover more about what’s going on, why, and how.

However, City has failed to share any photographs or formally acknowledge the striker’s arrival at the Etihad Stadium, which has some fans worried. The transfer market does not officially open until Friday (June 10), and City claimed in their statement announcing their agreement with Dortmund that the deal will take place on July 1.

As a result, City fans have little reason to be concerned about the lack of an announcement. According to the article, all of the essential content to reveal Haaland is ready and waiting for the click of a button once all of the procedures have been accomplished.

Meanwhile, it is unknown which shirt number Haaland will wear at City. His camp hopes he can keep wearing the No.9 shirt to help build his brand, although the number is presently used by Gabriel Jesus. However, with the Brazilian’s future at the Etihad Stadium uncertain, Haaland may be able to source his preferred preference.

Furthermore, Manchester City striker Gabriel Jesus and Roma forward Tammy Abraham are among the names on the shortlist to play at Emirates Stadium. Jesus, in particular, appears willing to leave the reigning Premier League winners, with his representation apparently conducting conversations with Edu over the previous several months.

Arsenal made the first approach for Jesus in November, with Edu maintaining regular contact with both the player’s agent and the City striker himself.

His contract expires in 2023, so he might go this summer. However, according to The Athletic, the first-team unit has a firm stance on the number problem. Essentially, as long as Jesus remains a City player, they don’t want him to lose his number because it would send a negative message to the team.

With all of this in mind, if City decides to give Haaland the No. 9, it’s probable that Jesus has already gone on, or that any announcement of Haaland as the club’s new No. 9 would signal that Jesus is on his way out of Manchester.

If the Norwegian wears a different number when he is ultimately presented, City will have given a strong indication that he will remain at the club.