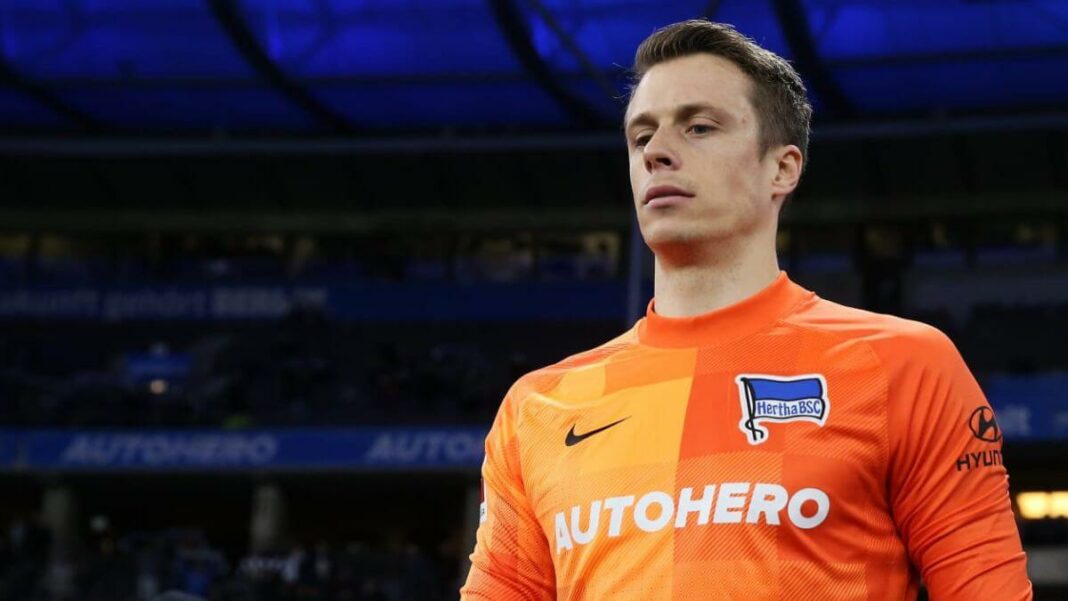 This means Schwolow will be temporarily playing as a goalkeeper for FC Schalke 04 in the next season replacing Martin Fraisl, who has reportedly denied extending his contract saying neither is he treated according to his potential nor being paid well enough.

With this FC Schalke 04 has completed signing Schwolow for their 2022/23 campaign. Although the details of the deal is still not disclosed by any of the clubs, it is very much confirmed that Schwolow will be playing for FC Schalke 04 in the coming season and Schalke will be transferring € 300,000  to Hertha BSC as the loan amount.

Schwolow has played for Bundesliga, SC Freiburg and Arminia Bielefeld. According to FC Schalke 04, Schwolow has been signed for his experience as a goalkeeper and the contribution he made for the previous teams he was in. He is expected to improve the team and its stability. The club is expecting him to contribute to achieving the targets for the next season.

However, this deal is not much of a profit to Schwolow. From the words of the sporting director of FC Schalke 04, it is clear that Schwolow has given up on lots of money for the signing of this deal.

The sporting director said he was impressed by this choice of Schwolow during the negotiation. This shows how much he prioritizes his passion for football. And he is happy that Alexander, who is an excellent goalkeeper will provide the team with lots of balance and stability. He is confident that with Alexander’s goalkeeping and strategies, the team together can reach the next phases of their milestone in the next season and play better.

Rouven Schröder, the director further agreed that Alexander had all the qualities a number one goalkeeper needs and that He will fit in well with the club and the team!

“I’m overjoyed that the trade has been completed, and I’ll be at Schalke in time for pre-season,” Alexander stated. I’m aware of the obstacles that lie ahead of us — it’ll be a difficult period – and I’m eager to jump right in alongside my new comrades.”

To date, the 1.90m tall goalkeeper has made 176 appearances in the Bundesliga and 33 appearances in the second level. He spent most of his career at SC Freiburg, joining as a 16-year-old from SV Wehen Wiesbaden in the summer of 2008 Schwolow went up to their U23s after two seasons in their program before earning his first professional deal in January 2012.

Schwolow spent the 2014/15 season on loan with Arminia Bielefeld, where he was a key part of their 3. Liga championship and DFB-Pokal semi-final appearance.He has been registered for Hertha BSC since the summer of 2020.

Previous articleYouri Tielemans To Stay With Arsenal Instead Of Yves Bissouma; Gabriel Jesus Gets A Boost.
Next articleFC Bayern Agreed To Move With It’s Goalkeepers Christian Früchtl And Ron-Thorben Hoffmann!!