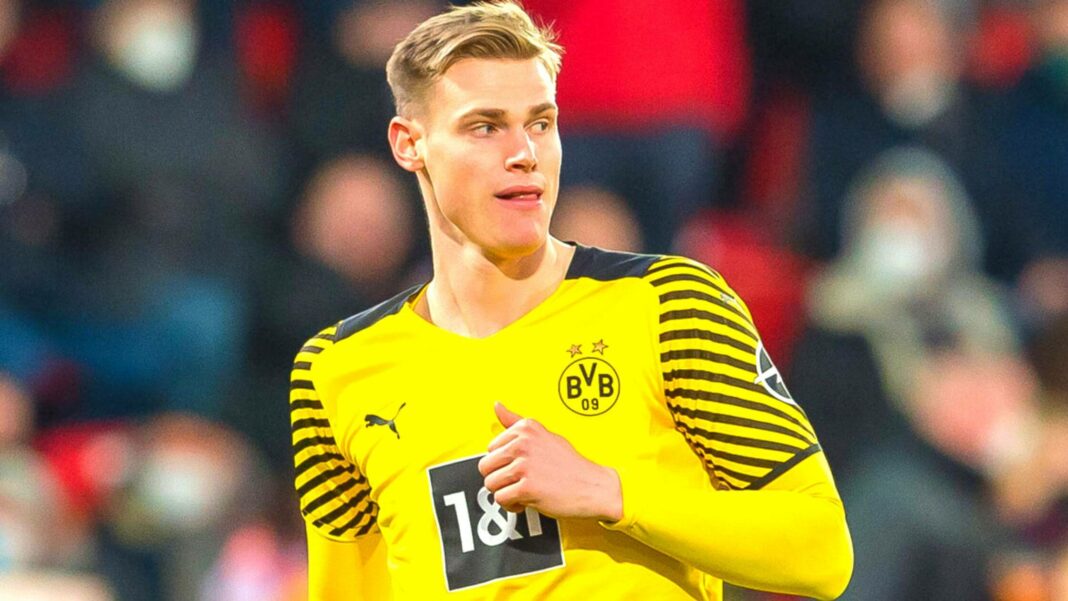 Steffen Tigges, a forward for Borussia Dortmund, has passed his medical at FC Köln.

Steffen Tigges, a striker for Borussia Dortmund, was born on July 31, 1998 in Germany. Tigges made his Bundesliga debut on January 3, 2021, as a replacement for Erling Haaland in the team’s match against VfL Wolfsburg.

Signing The Striker From Dortmund!

The 23-year-old will join the Billy Goats for an estimated €1.5 million, giving Anthony Modeste some competition.

Tigges made his Bundesliga debut in January 2021 under temporary Edin Terzi but was injured for much of last season. In nine Bundesliga games under Marco Rose, Tigges scored three league goals in 103 minutes.

Tigges’ arrival to Köln’s RheinEnergieStadion will reduce some of the pressure on Modeste, who scored 20 goals last season, accounting for 38 percent of Köln’s 52 Bundesliga goals.

Tigges addressed BVB management last week to express his intention to quit the club. Given the arrival of Karim Adeyemi and the fact that they are still looking for a successor for Erling Haaland, with Saa Kalajdi the current favorite to replace the Norwegian, playing time would have been difficult to come by.

“For the previous three years, I’d want to express my gratitude to my colleagues, coaches, and members of the professional and U23 staff,” Steffen highlighted.

“I’d want to thank every single fan who has stood by us and me through thick and thin. I’ve always appreciated performing for and in front of you! “BVB will always hold a special place in my heart,” he said.

Dortmund striker Steffen Tigges will be introduced as a Köln player very soon by Germany’s cathedral city club. A €1.5 million move has been completed in Germany. As part of the agreement, the 23-year-old, who has three Bundesliga goals in 15 top-flight games, would receive a small wage increase.

In December of 2020, Tigges was promoted to the BVB first team under temporary coach Edin Terzic. Nonetheless, he would have been bound for BVB II this year under Terzic, making this a fantastic opportunity for the late bloomer to make the step up. Tigges has scored 38 goals for Dortmund’s reserves in the Regionalliga, Germany’s third division.

“We’re ecstatic to have been able to sign Steffen Tigges,” said Keller. “Steffen has a lot of traits that make him a good attacker. He can finish within the box, hold the ball up effectively, move well in the air, and read the game well,” he added.

FC Köln managing director Christian Keller said, “He also displays a willingness to always work and be combative against the ball.”

“At the same time, Steffen can keep improving and progressing in every aspect of his game.” This is encouraging for the future. It’s also crucial that Steffen has healed from his March ankle injury. He’s already in rehab, so we’ll try to include him in team training during the preseason.”

Steffen Tigges Had This To Say

“I am excited to join 1. FC Köln and am certain that I will be able to contribute my skills to the squad and continue to grow at the top level. The conversations with the coach and officials immediately convinced me that this is the best decision I’ve ever made. I’m certain that I’ll be a good match for the squad and the style we play, and that we’ll have a successful season. The fact that 1. FC Köln is one of Germany’s largest teams, with tremendous fan support, which was also a major factor in my decision. I’m excited to get started.”