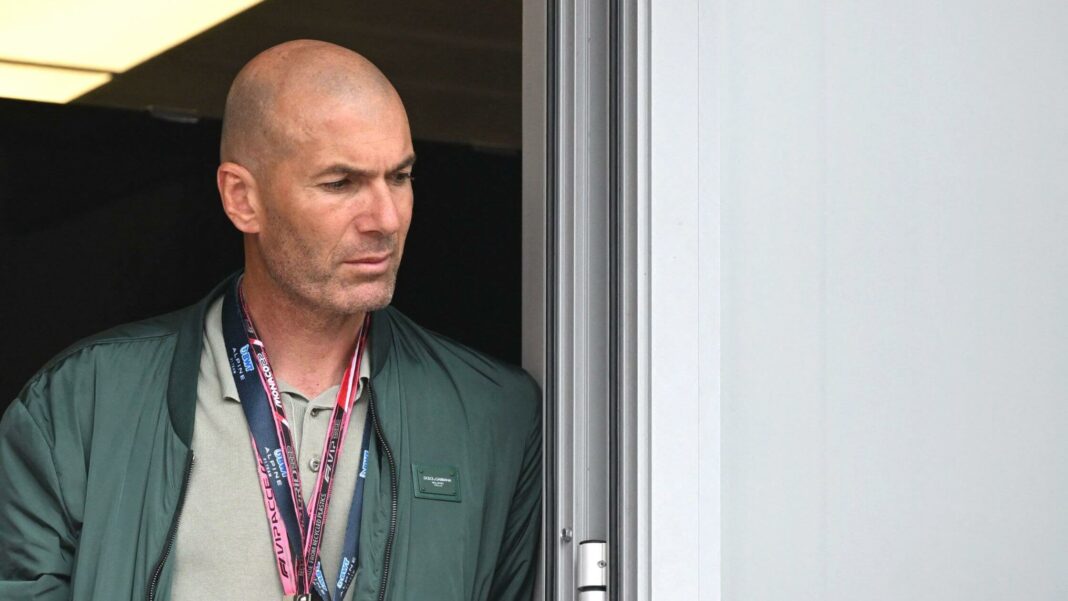 One of the most intriguing rumors in this summer market isn’t about any player, it’s the one regarding Zinedine Zidane potentially getting the reigns of the star-studded PSG squad. The French manager has been heavily linked to a Parc des Princes move this summer and it may turn out to be a dream linkup if it happens.

What Is The Truth Behind The Rumours?

The Frenchman has been one of the most decorated managers of this past decade, credit to his two stints at Real Madrid, and hasn’t taken up any challenge ever since his exit from the Los Blancos in 2021. PSG would be hoping to get their hands on the much-awaited first champions league title with the man who won the title in the famous three-peat with Madrid (2016-2018). PSG in the past has been a club to chew and spit out managers regularly. Be it Emery, Tuchel, or even Ancelotti, the Parisians have sacked managers who have failed to get them to European glory in their set time span and Zidane might become just another big-name manager to not have success in Paris. But things may also turn out to be just the opposite.

Zidane just might be the appointment that Paris needs to get their hands on a UCL trophy. He will bring an insane amount of European pedigree to the Parisian camp. PSG is a team with unbelievable individual prowess with the likes of Kylian Mbappe, Neymar, Lionel Messi, and Marco Verratti being part of the lineup.

The team has suffered from fluent on-field chemistry and the last campaign under Pochettino has been considered a failure by the majority even with the presence of such talent. Zidane has the experience of handling huge personalities and making them work in a cohesive harmony because of his time in Madrid. Therefore he might be the perfect fit to convert this squad of superstars into a team.

Zidane has trusted the 4-3-3 formation throughout his managerial career and will most likely deploy the same at PSG. He likes keeping the majority of the possession and therefore having the likes of Verratti and Wijnaldum at his disposal will give a huge advantage in the midfield area while lionel Messi also joining the midfield nowadays provides additional control.

He will have two of the best wingers in the likes of Mbappe and Neymar which will provide control over the wide channels. PSG is a team in an overhaul state with the likes of Di Maria leaving the club therefore the French midfielder will have the perfect opportunity to create a team as per his liking. Zidane made many good signings at Madrid like Vinicius Jr. and Militao to name a few and with the help of financial backing that PSG has, he should have no problem signing any player that he wants.

The French midfielder might be the key to bringing out the best of Lionel Messi because Mauricio Pochettino has been a failure in this argument. His continual deployment at the right-wing this season has seen his influence on the game decrease as he no longer has the required stamina and pace to be a full-fledged winger. The Argentine forward likes to drop deeper in the midfield nowadays because of his age and act more like a playmaker. Zidane being of the most talented playmaker to ever grace the game might know a thing or two about being influential in midfield, especially when you take the extra-terrestrial talent of Messi into consideration.

When it comes to man-management, Zidane is far more talented and experienced than Pochettino. His success in managing the likes of Cristiano Ronaldo, Gareth Bale, and Sergio Ramos at La Casa Blanca greatly helps his case for potentially sparking a flame of chemistry in the team which hasn’t been seen under previous managers.

The linkup between Mbappe ad Zizou in Paris might be the best opportunity for Kylian to establish himself as THE best player in the world and get his hands on potential Ballon d’Or. Forwards like Benzema and Cristiano Ronaldo were at their absolute peak under Zidane and this might be repeated in the case of Kylian Mbappe.

The big-money takeover of PSG happened in 2011 and ever since the change of administration the club has flushed out money with no restraint at all to construct a team that can join the European elites. PSG has been extremely dominant domestically, winning eight of the last 10 Ligue 1 titles. However, the club is still lacking the biggest crown jewel of European football, La Decima.

Zinedine Zidane has had a career decorated with European success, both as a player and a manager, making him the perfect candidate to guide this super team towards the Champions League title. He has every single ounce of managerial expertise required to instill calm in the chaotic lockerroom of PSG and keep all the egos in check in order to make the team a smooth working machine that has the potential to produce trophies like every other European elite.

No official agreement has been reached between the club and the Frenchman yet but this is a golden opportunity that has come knocking at the Parisien doors and letting this go without fighting for it will be the biggest mistake PSG could make in their considerably small history at the top of Europe.