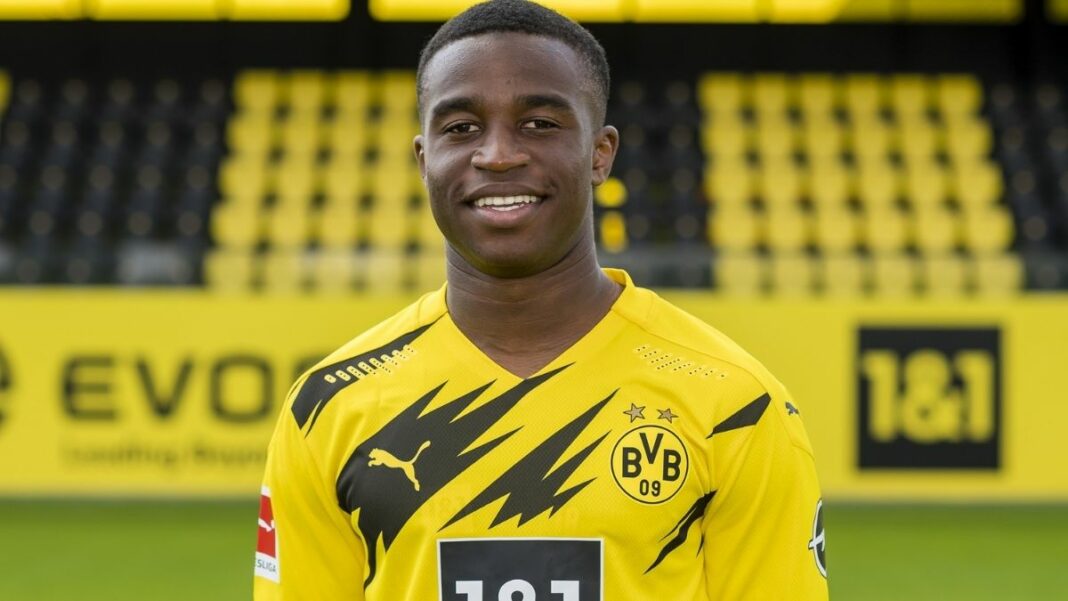 Youssoufa Moukoko has become the youngest UEFA Champions League player of all time, just days after establishing the same record in the Bundesliga, but what else do we know about the free-scoring teenage striker from Borussia Dortmund?

After replacing four-goal Erling Haaland in BVB’s Matchday 8 5-2 hammering of Hertha Berlin just a day after turning 16, Moukoko’s appearance against Zenit Saint Petersburg earned him the Champions League’s youngest player as well, as at 16 years and 19 days of age.

Moukoko has already earned two U20 caps for Germany after scoring three goals in four outings for Michael Feichtenbeiner’s U16 team.

After the DFL decreased the age at which a player may legally make his Bundesliga debut without special dispensation to 16 in April of last year, it was only a matter of time until Moukoko broke further records.

When he scored against Union Berlin on Matchday 13 in December 2020, he became the league’s youngest ever scorer, almost a year younger than previous occupant Florian Wirtz on his debut goal.

Youssoufa Moukoko (born November 20, 2004) is a German striker who currently plays for Bundesliga club Borussia Dortmund. He is well-known for his ability to score at an early age.

He was born in Cameroon and currently represents Germany at the international youth level. Since 2019, Moukoko has had a €10 million advertising contract with Nike’s athletic goods company.

The center striker signed a contract with Borussia Dortmund in July 2020, which pays him a hefty salary of 250 thousand Euros (227 thousand pounds) every year.

This indicates that the ordinary guy would have to work for 0.6 years to earn Koko’s same amount in a month.

The Cameroonian wonder kid received his football education in Germany, and he signed a contract with Bundesliga club Borussia Dortmund in 2020, increasing his net worth to 500 thousand Euro (455 Thousand Pound).

With only 15 years old, it’s difficult to estimate his market value, but don’t be surprised if Dortmund sells his talent for less than a million euros (900 Thousand Pound).

Moukoko spent his first ten years in a predominately Muslim neighborhood in Cameroon’s capital, Yaoundé, with his grandparents. In the summer of 2014, his father, who has lived in Hamburg as a German citizen since the 1990s, brought his kid to Germany.

Youssoufa is not the family’s only footballer. Borel, the older brother, is a left-back who was recently on trial with fifth-tier Schwarz-Weiß Essen, where he had previously played twice before suffering a groin injury earlier this year.

Koko is only interested in the ball at the age of 15! As we should all, thus there are no rumors or news, or updates about Moukoko’s girlfriend.

The Cameroonian kid is only 15 years old, but you’d never guess it from his physique! This boy takes care of his body like a professional athlete should, low on fat and packed with muscles, and he doesn’t seem to be into tattoos either.

Dortmund, Germany is the location where he lives. In his Dortmund apartment, Koko celebrates his 15th birthday with friends and family. And it appears that he’s received a really special gift from Lionel Messi, the greatest player in football history!

Moukoko makes and takes risks with his low center of gravity, razor-sharp control, and remarkable game awareness. He also has a good touch with his preferred left foot and is a complete goalkeeper.

Only once or twice in a generation does a player score 141 goals in 88 youth games, and no one other than Cristiano Ronaldo will ever come close to Messi, but Moukoko’s early signals are incredibly promising.

“Moukoko is a lot better than I was when he was his age. I’ve never seen a 15-year-old perform so well in my life. He has the advantage of already playing for Dortmund at the age of 15. I was still playing for my hometown of Bryne at his age.” – stated Dortmund’s pre-season camp in Switzerland, Erling Haaland.