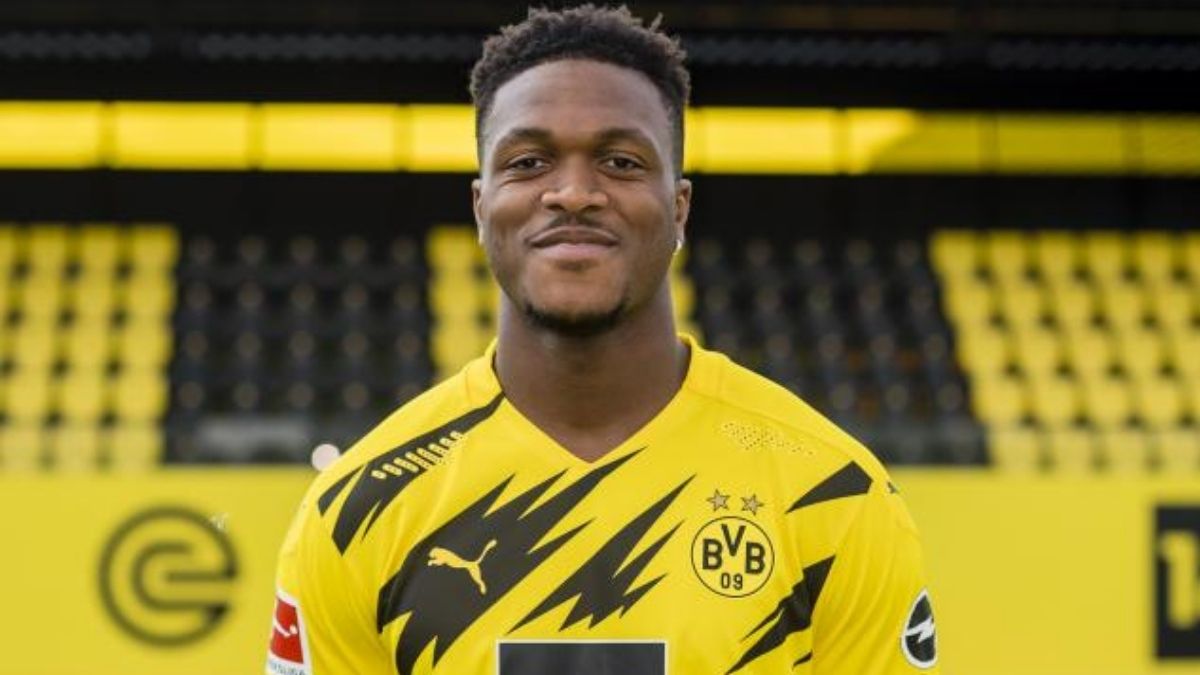 Dan-Axel Zagadou is a professional footballer from France who now plays for Bundesliga club Borussia Dortmund as a center-back or left-back.

From under-16 through under-21, he has represented France. Zagadou began his career as a youth at US Créteil in his hometown before joining Paris Saint-Germain at the age of 12 in 2011.

He subsequently spent the next five seasons at PSG’s academy until being called up to the reserve squad in 2016, where he made nine CFA appearances.

Dan-Axel Zagadou‘s contract with Borussia Dortmund is set to expire this summer, and Sebastian Kehl, head of the department, has announced that he will not be renewed.

This weekend, the Frenchman will play his final match for the Black and Yellows against Hertha Berlin.

According to Sebastian Kehl, the two parties had an open discussion before deciding not to extend the defender’s contract.

“Dan-Axel has been with us for a long time; he is a wonderful person and a fantastic footballer.” “We wish him the best of luck,” Kehl continued.

Dan-Axel Zagadou has appeared in 91 games for the club. Over the course of his BVB career, he has had to suffer a number of injuries.

Over the last five years, he has missed a total of 83 games due to injury. And it was because of his susceptibility to injuries that the BVB decided not to renew his contract.

Niklas Süle and Nico Schlotterbeck have both joined Borussia Dortmund ahead of the next season. Even if he had signed a contract extension with the club, Zagadou would have struggled to get playing time next season.

Karim Adeyemi will replace Erling Haaland at Borussia Dortmund after a summer transfer from RB Salzburg.

Nico Schlotterbeck of Freiburg is also being pursued by Borussia Dortmund. The team’s central defender has had an outstanding season, scoring four goals in the process. His achievements in March 2022 also earned him a call-up to the German national team.

What Dan-Axel Zagadou’s future holds remains to be known. However, he is still only 22 years old and has a lot of promise. He has the potential to develop into a good defender if he can avoid injuries for a long time.

Any club willing to take a chance on a free agent will be allowed to sign the Frenchman.

Ralf Rangnick, the interim manager of Manchester United, is said to be the ‘driving force’ behind the interest, having previously tried to sign the player for RB Leipzig.

Dortmund, on the other hand, is reportedly still hopeful of persuading the Frenchman to sign a new contract with the Bundesliga club.

Zagadou has only made nine appearances for BVB this season, after missing the first few months of the season recovering from knee surgery.

On a lighter note, the season’s final match is approaching, and we could be in for an emotional day at the Westfalenstadion on Saturday when Borussia Dortmund takes on Hertha BSC.

Michael Zorc and Marcel Schmelzer, both club legends, are set to retire at the end of the season.

Axel Witsel, Erling Haaland, and Dan-Axel Zagadou will also say their goodbyes to the BVB faithful.